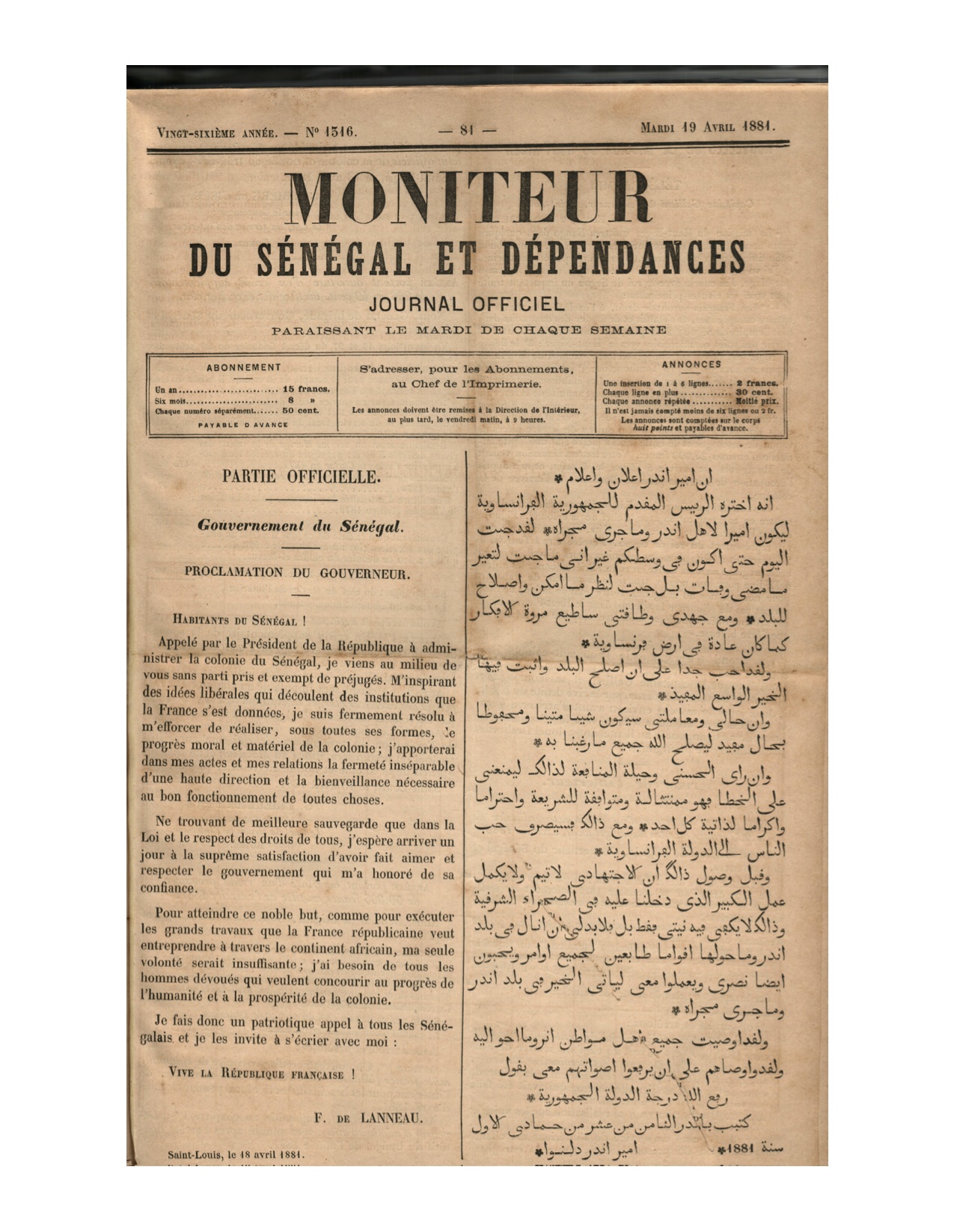 By the time the engines of the French machine of colonial conquest started in the mid nineteenth century, the colonial authorities could depend on Africans, who had been educated within the traditional Islamic curriculum of the region, as local intermediaries and agents. Capable in Arabic, they could fulfill administrative needs and communicate between colonizer and colonized. Having already developed an Arabic scholarly-administrative complex from its colonial endeavor in Algeria since 1830, the French made full use of a common language that had far greater reach than any other—such as Wolof, Pulaar, or Serer among others—in what was otherwise a linguistically fragmented zone. Near the turn of the twentieth century, the reliance on Arabic would decrease as the French established themselves more firmly by homogenizing their conquered territory with French education and the rationalization of the state.

Yet in April 1884 when this document was printed, the hegemonic position of French language and Latin script had not yet been achieved. At first glance, we see Arabic serving the functional needs of the French colonial administration. The use of Arabic alongside French, it would seem, was a policy in pursuit of pragmatic ends. A careful reading reveals, however, that they are far from transparent translations of equivalent terms, even if the attempt to translate the message of the French governor Louis Ferdinand de Lanneau into Arabic is clear.

Lanneau made a proclamation upon his appointment to the post of governor, in which he pledges to execute all of his duties to the French Republic by encouraging the “moral and material progress of the colony.” He uses the language of institutions, law, and rights, reflecting the highest ideals and secular inclinations of the metropolitan center. This progress is the great work that Republican France has taken up for the African continent, because as the contemporary French Prime Minister Jules Ferry made plain in a speech to legislators, the higher races “have the duty to civilize the inferior races.” In some ways, the French portion of the text foreshadows the coming horizon of the “Scramble for Africa” that would start in earnest after the Berlin Conference later that year. Within a decade, the French would go from having trading outposts along major rivers and four communities along the coast (where they had been for at least two centuries), to possessing an enormous swath of territory that constituted the majority of the West African sub-continent. All along the way, the Arabic language was instrumental.

But what happens when the French speak Arabic to Africans? In this document, at least, colonial translation reflects the political imbalance of the colonial predicament. While we can see that the French discourse of liberal republicanism is translated into Arabic, the Arabic words have a different valence than the original. For example, whereas the Arabic text uses the word balad (which means country or land), the French uses colonie . The difference is that balad does not connote the subordinated relationship manifest in the word “colony”.

This single newspaper page contains another deep incongruity of colonial governance, namely, the religious justifications for the imperial ambitions of the secular Republic. By making the colonial agents representing the French empire speak a religious idiom, they contradicted the anticlericalism that had grown to characterize laïcité, or French secularism. After all, “May God raise the status of the state” is not exactly “Vive la République Française!”

Reading the two texts side by side, one can’t but help but to get the sensation that colonization required speaking with a forked tongue. This duplicitous speech enlisted Arabic in its cause. Accordingly, we cannot read languages as if they are autonomous territorial zones. Just as the French language has been subject to subversion by colonized people using it, France and its Francophonie has inflected Arabic with discourses that reflect the former’s colonial power. Translation is just one of the important mechanisms that has made this possible. The question that remains is whether this inequality is an inherent product of (mis)translation or a reflection of the political asymmetries of colonization.