I was amazed by the way Ozyurek criticized Kemalism, even though she belongs to a family of well-known Kemalist politicians in Turkey. Six years after its publication, the book is still relevant in its description and analysis of the complex relation of a ‘secular’ state with its citizens.

Kemalism has long been a core field of research for scholars of Turkish politics. Mustafa Kemal Ataturk’s ideological mission to create a modern and Westernized state from the ashes of the Ottoman Empire was epitomized by his followers in six main principles: republicanism, populism, secularism, revolutionism, nationalism and etatism. These principles were named the “six arrows” of Kemalism and continue to form the essential ideological underpinnings of the Republican People’s Party (CHP), the first political party in modern Turkey founded by Ataturk himself. In Nostalgia for the Modern: State Secularism and Everyday Politics in Turkey, Ozyurek enriches the significant body of academic literature on Kemalism and its legacies from the perspective of a scholar who has distanced herself from the Kemalist circles she grew up in.

In this book, Ozyurek centrally argues that secular state ideology has become ‘privatized’ through nostalgia. She analyzes the ways in which Kemalist ideology has penetrated into the private sphere of the citizens, along with (and, perhaps, as a result of) recent neoliberal market reforms. By portraying a glorious, modernized and opposition-free understanding of Turkey’s past and adapting a sense of nostalgia for the early days of the Republic to the consumerist demands of the market, Kemalist state ideology has expanded its scope into citizens’ private spheres. Though this expansion was initially a reaction to the invasion of private domestic space by anti-Kemalist groups, it has ultimately allowed the state to expand its influence. Through the employment of new spaces created by neoliberal policies such as production of alternative consumption goods depicting Ataturk as a paternal figure rather than a commander or transforming official military ceremonies into street parties to celebrate national holidays, what was previously defined as official state ideology ceased to be limited to the public sphere, becoming progressively more deeply imbricated in citizens’ private day-to-day lives. This transformation marks a new form of governmentality that replaces authoritative state apparatuses with a different kind of subjectivity based on personalized relations such as ‘love’ and ‘volunteerism.’ Ozyurek traces these changes in recent developments, such as the public promulgation of life stories of first-generation Kemalists, museum exhibitions, and the commodification of the objects that represents Kemalist ideology, as well as celebrations of official holidays and even alternative versions of statist nostalgia by non-secularists.

In the first chapter on biographies of first generation Kemalists, Ozyurek highlights the attitudes of older Kemalist women towards proper “modern” gender presentation, seeking to deemphasize their femininity in order to be viewed as respectable subjects in the public sphere. These women thought of themselves as objective, rational subjects and judged ‘headscarved women’ for their ‘choices.’ This analysis of the self-conception of first-generation Kemalist women is a striking example of the predetermined conditions of the ‘public sphere’ as Talal Asad characterizes in his famous article “Religion, Nation-State,Secularism.’ 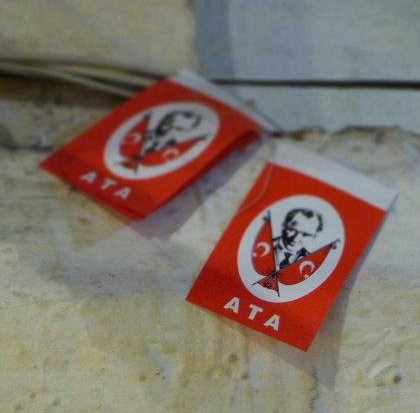 Following her analysis of the life stories of first generation Kemalistsshe tries to understandhow, in a neoliberal context, citizens’ relation to the state evolved from that of embracing Ataturk as a nationalist paternal figure to one in which individuals take on the responsibility of preserving and passing on his ideological and political inheritance The mass commodification of statues of Ataturk—one of the most prominent public symbols of Kemalist ideology—illustrates this privatization of the state quite aptly. Celebrations of official holidays were transformed as well, replacing formal activities organized in public schools with obligatory attendance with free pop music concerts held in the streets, open to everyone. Lastly, she specifies how Islamists employed this concept of nostalgia differently than Kemalists in the reproduction of the past in a legitimizing argument for their political presence, such as quoting from Ataturk on the role of Islam in society or using his picture with his headscarved wife in the media. By utilizing these specific historical materials, Islamists also reconstituted nostalgic discourses of Kemalism.

Although Ozyurek’s work offers a strong account of the intertwined relations between public and private in the Turkish context, this book can be considered problematic in certain respects. Her careless use of terminology overshadows the persuasiveness of her arguments: for example, despite the fact that she gives a brief historical background in the beginning, she neglects the nuanced meanings of terms like ‘etatism’ or ‘secularism’ necessary and its historical political context. as more proponent of state-led development and anti-market policies in the early years of Republic and claiming that is the reason behind the problematic relation between subsequent Kemalist policy and 1980’s neoliberalism ‘conceptual stretching’ in order to support her arguments.

Ozyurek insists that the first generation Republicans yearning for the wealthy and peaceful past arises from Kemalists’ sense of nostalgia and the longing for the 1930s. This reading of history implies that notions of time and progress are reversed in Turkey and that the golden era of Kemalism is left behind. Ozyurek correctly refers to this power struggle between secularists and other groups and the distribution of resources that underlies this struggle. However, her overemphasis on neoliberalism posiexhibits new holders of power as non/anti-secularists, which is incorrect.

Ozyurek occasionally misreads data, which weakens her argument. In the first chapter, she notes how dates of personal significance, such as birthdays and wedding anniversaries, are often deliberately aligned with dates significant to state activity. She interprets this as evidence of the penetration of state ideology into the private sphere as a result of neoliberalism. However, as can be seen in many historical documents, this is not a new phenomenon. Rather, during the Ottoman Empire people usually used official state events as reference points for personal histories. Even more troubling is Ozyurek’s claim that a girl in white clothes represents the Republic as a part of “patriarchal Middle Eastern culture.” Not only does this claim reinforce problematic Orientalist assumptions about gender in Muslim societies, but also singularizes the Turkish nationalist experience as symptomatic of ‘Oriental patriarchy’ when in fact gendered symbology has constituted a crucial tool for a wide range of nationalist movements.

** Ozyurek employs terms such as ‘secular’ or ‘Islamists’ to draw an analysis of the struggle between adherents of Kemalism and other opposition groups. It should be noted that this imprecise use of terminology pictures those groups as monolithic entities, which is highly problematic in terms of reflecting the pluralist structure of Turkish society. However, I am using these terms to be consistent with the original text.