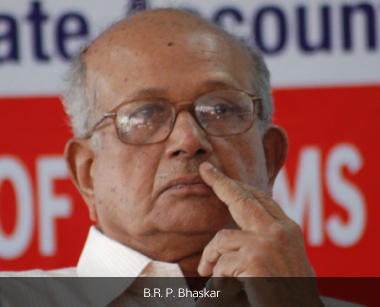 B.R.P. Bhaskar is one of Kerala’s most respected journalists, an avid blogger and currently a columnist for Gulf Today. He “started his career in journalism in 1952 and has worked in The Hindu,Statesman, Patriot, United News of India, Deccan Heraldand Asianet. He played an instrumental role in the launch of the Asianet television channel… He has been active in the socio-political scene of Kerala, especially in the field of human rights protection.” He has published numerous articles and books and adapted Malayalam novelist Takazhi’s epic novel “Kayar” for a Hindi language mini-series telecast nationally. He is currently the Vice-Chairman of the Kerala Chapter of Transparency International.