While the bookstores seem to trade predominantly in state sanctioned texts (which would explain the dust), Mafroosh roams the boundaries of the permissible. It is held in Etienne square, under eroded arches that once, I’m told, served as a gateway to the best nightclubs and bars in all of Sudan. This was during the early years of Jafar al-Nimeri’s presidency, who ruled from 1969 until he was deposed in 1985. Now the much-diminished square hosts a loose group of playwrights, poets, novelists and readers who gather to exchange books and thoughts about them. Some are the old guard of the Sudanese Writers Union, but many are younger poets and writers in their late twenties and early thirties. Some of these young men and women live in shared apartments and writers’ kerrets around the city, while others are married with young children, working as journalists and activists and writing fiction on the side.

At Mafroosh, and around the city, banned books are circulated by hand. One young writer said he could get me a copy of an underground literary journal called Iksir, or Elixir. The next day, he literally handed them to me in a paper bag under a table at a cafe. They each have a colorful, chaotic cover and contain dozens of stories, essays, translations, manifestos, and drawings in pencil, oil, and coal. The creative energy that went into producing these two collections is reflected in their titles:  “Revolutions of the Heavenly Orbs” and “Torrents of Imagination”. And indeed, both the celestial and diluvian imagery is appropriate. The short fiction contained within trends towards philosophical abstraction, arcane Classical language, and a kaleidoscopic palette of cultural and literary allusions.

Etienne Square is a few blocks from downtown Khartoum, where a large parade ground boasts a dozen overturned dumpsters, their paint stripped away, their wheels exposed. Over the past decade, new flows of oil money allow for the possibility of a multi-billion Dubai style make-over, complete with glass office towers, a White Nile promenade, and a Kempinski hotel (a project that has been put, it seems, on indefinite hold).

Despite these ambitious plans, Khartoum is still the kind of city you can walk straight out of. From the middle class neighborhood of Taif, I would walk down to the Nile in the evenings, passing groups of young men drinking coffee by the light of their smartphone screens, huddled close, sharing earbuds, streaming the latest songs from Egypt and Ethiopia. Out further, near the brick yards, I would pass an old man in a white jalabeya watching TV in his courtyard. One night I raised my hand in greeting, and he his. All was good in the world, his kind greeting seemed to say, even as the television relayed news of the sacking of Umm Rawaba, a town five hundred kilometers to the south, a hard day’s drive from Khartoum. The old man shook his head in the dark and I walked down to the still-warm Nile, through the scent of the cooling brick.

A few days after book shopping at Mafroosh, I had the chance to meet the members of the executive committee of the Sudanese Writers’ Union. The Union itself is housed in a modest concrete building on a quiet side street. Outside, there was a small courtyard with a lemon tree and a brilliant advertisement for the savvy mobile phone company Zain, which sponsors some of the Union’s events. Inside, the director Kamal al-Jizouli gave me a brief tour. I remember the well-swept concrete floors, faded photographs in irregular frames hung on the wall, an old refrigerator humming from a kitchen tucked away beyond a corridor. 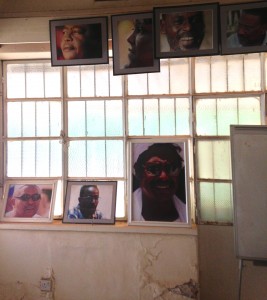 Kamal and I sat in his office as the members of the committee shuffled in. They were mostly old Communist party hands, kind, sallow men of an older generation. Many of their colleagues, proteges, and students had left. Even the darling of the Writer’s Union, the enigmatic Abdelaziz Baraka Sakin, had left to seek asylum in Austria after publishing his most recent novel, al-Jango, which depicted the grotesque conditions in a women’s prison in the city of Qadaraf in Eastern Sudan.

After the meeting, we moved to the courtyard outside. They smoked Bringi cigarettes under a lemon tree, discussing an upcoming commemoration of the poetry of Mahjoub Sharif and the government’s unsuccessful attempts to take back the town of Umm Rawaba. As they talked, one man, a painter, surreptitiously filled his pockets with lemons. When he caught me watching him, he smiled and mouthed, “For my wife”.

4 thoughts on “Sketch of a Literary Scene”