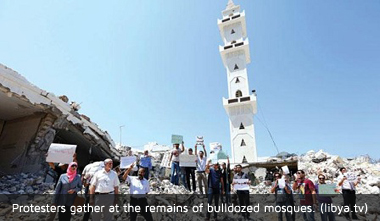 Multiple attacks on Sufi religious and historical sites last week highlight two threats to Libya’s democratic transition: Islamic extremism and the failure of the government to take action. On 25 August, Salafist extremists destroyed a Sufi shrine and library in Zlitan. The following day, Salafist extremists attacked the Sha’ab Mosque in Tripoli, which contained the graves of revered Sufi figures. In response, Libyan activists, local civil society groups, and international organizations, such as UNESCO, have protested these attacks, calling on the government to protect historical Sufi sites.

Such incidents are particularly disconcerting as they threaten religious freedom and may indicate a rise in Salafism in Libya, or at least an increase in the aggressiveness of minority religious extremist groups. These Salafist extremists consider Sufism – a mystical movement within Islam – heretical. It appears that these groups are inspired by a Wahhabi interpretation of Islam, which is highly intolerant of any practices or beliefs that it deems to be religious innovation. By condemning other Islamic faith groups, Wahhabi influence poses a serious threat to Libya’s religious, cultural, and historical integrity.

Perhaps more disturbing is the government’s unwillingness to respond to the violent actions of these groups and its failure to protect Libya’s different religious communities and historical sites. An eyewitness told the BBC, there was “a large group of Salafists – they are the ones with the bulldozers, and some military police are present. They seem to be overseeing the process, rather than preventing it… There are some bystanders who seem to approve.”

If the fact that the Libyan military police simply stood by as the mosque was attacked is not shocking enough, consider recent statements made by Libya’s interior minister. Following the aforementioned attacks and resulting criticism from the General National Congress, Interior Minister Fawzi Abdel A’al resigned. But he rescinded his resignation two days later, claiming:

If we deal with this using security we will be forced to use weapons, and these groups have huge amounts of weapons… We can’t be blind to this. These groups are larger in power and number in Libya. I can’t enter a losing battle, to kill people over a grave… If all shrines in Libya are destroyed so we can avoid the death of one person, then that is a price we are ready to pay.

A’al appears to be surrendering to the Salafist extremists and permitting them to run amok across Libya, desecrating tombs and destroying religious and historical buildings without fear of repercussion. His refusal to stand up to violence and intolerance is unacceptable. To give these extremists a free pass to continue to commit crimes against the Libyan people is irresponsible. As interior minister, he is responsible for maintaining security and order in Libya. He is responsible for protecting life and property. Yet, he refuses to do his job. With such an interior minister, how will the Libyan government ever maintain its authority over Libyan territory and ensure its security? How can Libyans respect a government that is unwilling to protect them from small groups of armed extremists? For the sake of the safety and security of the Libyan people, let us hope A’al resigns again soon.

In response to the violent attacks, the League of Libyan Ulema urged Libyan officials to “pressure the government of Saudi Arabia to restrain its clerics who meddle in our affairs” by spreading the Wahhabi ideology. The organization also asked Libyan citizens to protect Sufi sites “by force.” Moreover, Aref Ali Nayed, a Sufi scholar, harshly denounced the extremists’ actions, and he said, “Even Mussolini’s fascists did not treat our spiritual heritage with such contempt.” If nothing is done to protect Sufism and its place in Libya, sectarian tensions could rise between the Sufi population and the extremist Salafists. The government must act to avoid further tears in Libya’s social fabric and to ensure religious freedom and security.

Sufism is deeply rooted in Libya’s past, present, and future. Despite the efforts of these extremist Salafist groups to remove the physical symbols of Sufism, they will never be able to completely eradicate its presence. The Sanusiyya, Libya’s most prominent and influential Sufi order, has left a significant impression on Libyan history.

Ali Abdullah Ahmida, in his article, “The Sanusi Order or The Sanusiyya 1837-1932,” examines the order’s revolutionary role in Libya, and he writes, “Just as the Sufi movements had led the anti-Iberian attacks on Morocco in the sixteenth century, new Sufi reformist movements such as the Sanusiyya and Mahdiyya took the initiative to organize local resistance against European imperialism in the late nineteenth century.” In Libya, the Sanusiyya led the resistance against the brutal Italian occupation. As Ahmida explains, the Sanusiyya had a strong unifying influence on the Libyan people against the Italian occupiers, because the order was able to “transcend ethnic and local tribal identifications.”

Libyan hero and leader of the resistance against Italy, Omar al-Mukhtar was also notably from this Sufi order. After independence from Italy in 1951, Idris al-Muhdi al-Sanusi, the grandson of the Sanusi Order’s founder, became Libya’s first king, and he ruled until Muammar al-Gaddafi’s military coup in 1969.

This brings us to the 17 February Revolution where Libya’s Sufi heritage remains prominent. Omar al-Mukhtar once again inspired the resistance and became a symbol for the revolution. Graffiti depicting his image, his symbol (the lion), and his quotes, such as “We win or we die,” are painted on walls in Tripoli and across Libya. His visage also graces the ten dinar bill. The current Libyan flag is the same as that during the reign of King Idris. Some individuals even drew comparisons from the start of protests originating in Eastern Libya with that of Al-Mukhtar’s resistance that was also based in the east. Thus, the Sanusiyya and its resistance ideology continued to influence the contemporary fight to remove Gaddafi from power and establish a democratic government. Sufism’s contribution to Libya and its history is deeply ingrained, and the mere destruction of its physical manifestations can never take that away.

One thought on “Libya’s Sufi Character Cannot Be Erased”