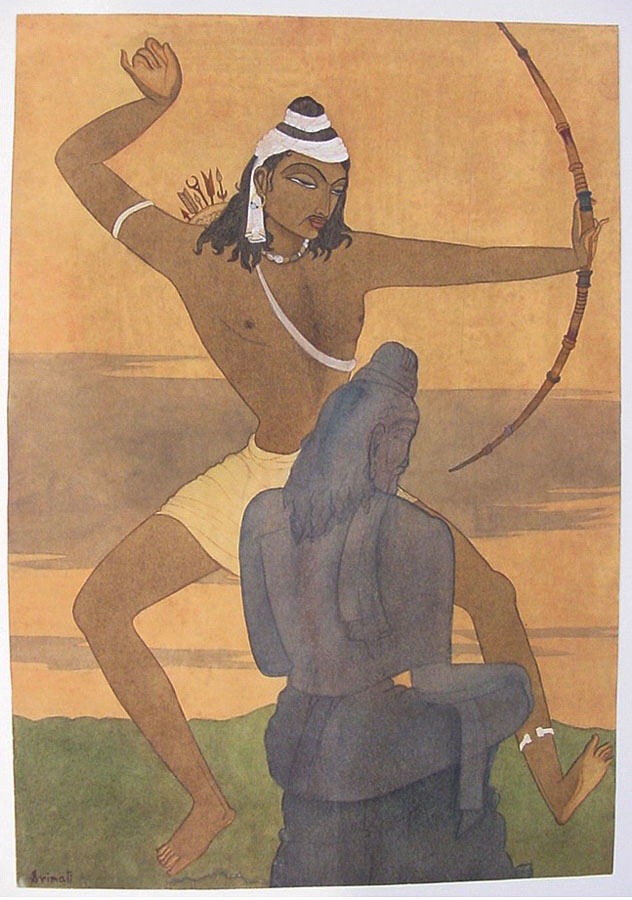 One day, when he’s practicing in the forest, the incessant barking of a dog disturbs him. He shoots arrows into the mouth of the dog without injuring it. When Drona sees the dog with its mouth full of arrows, he is amazed at the skill of the archer. Along with his disciples, the Pandava and Kaurava princes, Drona looks around the forest for the archer. When they come across Ekalavya, Drona praises him and asks him how he learned the art of archery. Ekalavya tells Drona that he learned it from him. He explains that he practices in front of a clay figure of Drona and he considers him his teacher.

Arjuna, Drona’s favorite disciple, turns to Drona and says, “You said I was the greatest archer in the world. How is it that this non-kshatriya is better than me – a trained kshatriya?” All the princes recall Drona showering praises on Arjuna and wait with bated breath for his reply. Drona turns to Ekalavya and says, “If I am your teacher, where is my gurudakshina?” Gurudakshina is a voluntary fee that a disciple pays to the guru upon completion of his studies. Ekalavya, thrilled that Drona is finally accepting him as his disciple, says, “Ask for anything and, I shall gladly give it.” [For an extended version of this story please click here.]

My retelling is from the point of view of Ekalavya’s mother.

The minute he told me he was going into the forest, I had a bad feeling about it. I asked him not to go. He didn’t listen. He picked up his bow and arrow; with tears in my eyes, I begged him not to go. He came over, held my face with both hands, wiped my tears with his thumb and said “I’ll be fine.” As he walked out, he said over his shoulder “Make salt fish curry, I’ll be home for lunch.”

The nagging feeling didn’t leave me, but I couldn’t convince him to stay. A little while later, I followed his footsteps for a short distance as I went into the forest to pick herbs. I came home, cooked, and waited for him. As the sun went down leaving behind a streak of orange and red like a blazing trail or a bleeding one, he walked in with his hand wrapped in leaves.

He came, lay in my lap, and told me what had happened. He had shot several arrows into the mouth of the royal hunting dog. Then, his idol, in flesh and blood, guru Dronacharya himself stood before him. He told him he considered him his guru and that he practiced before a moorthi of his that he made. Then,

Ekalavya looked up and said “I’m hungry.” He couldn’t eat, so I fed him.

I kept thinking how Drona didn’t nurture my son’s skill. In fact, he refused to teach him. He has no claim to it; it isn’t his for the taking. So how dare he? Then I knew. He dared, because he could, and he could because Ekalavya, in his innocence, worshipped him as his guru.

That bastard asked for gurudakshina. Not money or anything materialistic. He knew he couldn’t destroy Ekalavya’s skill, so he decided to destroy the source. He wanted my son’s thumb — the mighty thumb, which held the arrow to his bow, the thumb that had wiped away my tears just a few hours ago. One boy’s thumb, his life, to assuage the ego of another, an upper caste, who wasn’t half as skilled.

Samragni: “I’m a dreamer, writer, photographer, aspiring poet of the ordinary and a film-maker-in-the-making.”