Before leaving Columbia for my research, I decided that by investigating the sites of Sufi textual collection, I could start to approximate the development of a Sufi public space. Bibliographic institutions, I reckoned, were the key piece in forming a discursive community. I developed this idea from reading the secondary literature. Arabic manuscripts private family archives and Sufi brotherhoods were all topical themes that appeared in scholarly work. And so a project that looked at the collections of Arabic manuscripts held by Sufi communities seemed like a good way to enter into the field of scholarship.

However, after a summer in Senegal visiting many archives and libraries, talking to archivists, scholars, and teachers, I am weary of what we might call archival thinking in the western Sahel, a way of privileging textual artifacts, particularly manuscripts, that neglects contemporary contests over the proper authority in fields of Islamic knowledge.

Arabic is by no means a dead language in the western Sahel. On the one hand, it serves as a channel of dynamism for younger generations of Senegalese, who increasingly use Arabic as a public language to articulate their desires. Yet for older and more powerful members of society, who have been able to instrumentalize their control over the language, the contest over Arabic is a source of great anxiety. While I can only speak anecdotally, my summer in Senegal along with my knowledge of the scholarly literature compels me to say that we may be living in a moment when mastery of the Arabic language is the most widespread in all of Sahelian history. Yet, this phenomenon gets concealed when scholars emphasize the study of books that are no longer read. For what is an archive, if not the repository of documents that are no longer in circulation? 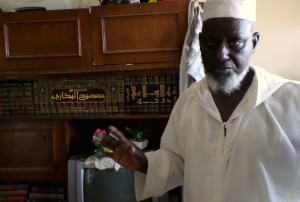 I came to a realization of this problem while looking for some of the manuscripts in Saint Louis, Senegal of Moustapha Ayane Sy, a modernizing teacher, translator and diplomat who studied and lived in North Africa and Saudi Arabia. I met with Ousman Niang, one of Sy’s closest pupils, who now teaches Arabic in a state school. While visiting his house, Niang revealed a manuscript collection of Sy’s poetry. Much care and respect was shown for the document, demonstrating a certain reverence for this literary heritage. After Niang had kindly answered my questions, it dawned upon me to ask if he also wrote. He promptly supplied a USB key with a long form poem, a qasida that he had been writing, entitled “State of the Shaykhs and Secularism.” One section in particular grabbed my attention because of its critique of the politico-theological establishment in Senegal. Making clear that the classical Arabic form of the qasida can be used today to address contemporary concerns, this section denounces the religious authorities for dishonest dealings in religious matters, particularly in fixing the start and end of Ramadan. Here is working translation:

This disagreement over the ‘eid shocked me / your violating the obligation (al-fard) of jama’ (?) and breaking the fast

In this excerpt, Niang attacks the clerical families who have maintained authority over Islamic knowledge and used their birth for the purpose of accumulating wealth. He then goes on to admonish the audience to abandon religious leaders who stray from the prophetic model of Muhammad. In Senegal today, this discourse would be considered an invective against the major families who are connected to the saintly lineages of the Sufi brotherhoods. Niang thereby contributes to a tradition of polemic in the region tied to the imperatives of reform that stretch back at least to the fifteenth century when al-Maghili wrote his replies to the emperor of Songhai Askia Muhammad, initiating the regional iteration of tajdid. Though this debate itself has a long history, and the literary form of the qasida predates Islam, Niang’s concerns are decidedly contemporary.

Academic scholarship has started to investigate the historicity of Arabic in Africa with the faintest recognition that Islamic knowledge is important and contested in the present. It seems that the hope is that old manuscripts will reveal something that might inform our understanding of the present. But actually, we might have it backwards. Perhaps, it is the present moment itself that reveals the history of Arabic in Africa.